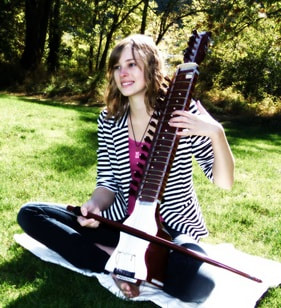 For much of the twentieth century many people assumed that the dilruba would eventually end up as an extinct instrument. Fortunately that has not happened and it is enjoying a new period of popularity. Not only is it fairly easy to learn, but it is also capable of a superbly beautiful sound.

The history of the instrument goes back to craftsmen combining two instruments together. On the bottom, a sarangi and on top; a sitar. The name comes from the Persian words "Dil" (meaning "heart") and "Ruba" (meaning "thief") and roughly translates to "the heart stealer." The instrument is a close relative to the esraj and taus (the playing style is, for the most part, the same for all). 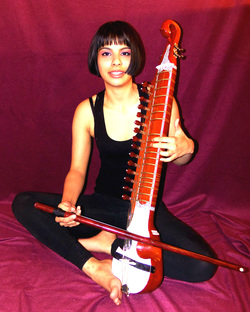 The Esraj is essentially the Bengali (eastern India) version of the Dilruba. It tends to be somewhat smaller in size and the shape of the sound-box is somewhat different. The sound is almost identical though and anyone who plays one will easily be able to play the other.

Both the Dilruba and the Esraj are the perfect instrument to assist in training the voice. For this reason they are used frequently as vocal accompanying devices.

Dilruba-s and Esraj-s are available for rent or purchase through Michael Wheeler Studios. They cost between $15-$25 per month plus $10 insurance. 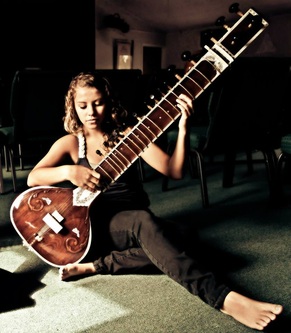 Perhaps no other Indian instrument is more well known than the Sitar. The instrument became standardized in court music during the 19th century in India, but in the west became popular through its use in pop/rock music from such acts as The Beatles and The Rolling Stones.

Sitar-s are available for purchase or rent through Michael Wheeler Studios and usually cost between $15-$25 a month (plus insurance of $10 a month). 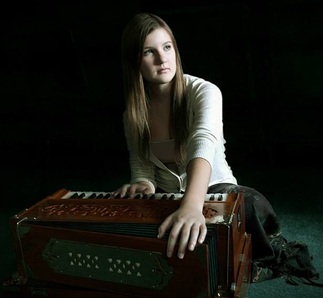 The harmonium can be compared with its close relative; the accordion. Both instruments use metal reeds which respond to air from bellows in order to generate their respective pitches. The original harmoniums were brought by Christian missionaries to India as large organs. Over time, Indian craftsmen (and women) scaled the instrument down to the point it could be played with only one hand (the other hand served to pump the bellows)

The harmonium is ideal for the the accompanying of singing poetry and prayers. It has also been used recently by many western popular artists such as Bjork and Modest Mouse.